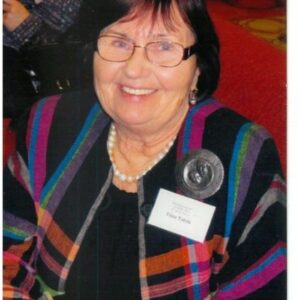 Tiina Talvik was born in April 21 in 1938 into a family of teachers. She graduated from The University of Tartu in 1962 and started her career as pediatrician and pediatric neurologist at Tartu Children`s Hospital. From the very first moments of her medical career she was enthusiastic, not only for her research but also for taking care of her patients. After working for a few years, she started to appreciate the importance of genetics and started a medico-genetical service in Estonia. This made her a pioneer of the field at the time. She started working as a geneticist in 1968 and was Head of the Laboratory of Medical Genetics of the Tartu Clinical Hospital, one of founders of the medico-genetical service in Estonia. She worked in the field of medical genetics until 1974, when she was invited to the Dept of Neurology and Neurosurgery of the Tartu University. She was an associate professor in the department since 1990 and created pediatric neurology as an independent specialty. This period of her life involved research, teaching and developing the specialty in Estonia. For 30 years she guided her students in the research of hypoxic-ischemic encephalopathy, oxidative stress and asphyxia.

Professor Tiina Talvik’s influence reached across borders. She played a role in bringing together all pediatric neurologists in the Baltic States with the creation of the Baltic Child Neurology Association. The association still holds congresses every two years.

From 2000 to 2003 she was the head of The Children’s Clinic of Tartu University Hospital and the head of the department of Pediatrics of Tartu University. She really motivated her younger colleagues to be interested in research and so 17 doctoral theses were done under her supervision. She was also the coauthor for over 200 scientific articles. During these years Children`s Clinic became very innovative and dedicated to publishing scientific research.

Due to her active research and social activities she has been acknowledged several times: a Research Award in Medicine from The Republic of Estonia, a medal from Tartu University and Tartu City, the Order of the Estonian Red Cross class I medal, award of The Republic of Estonia for long term research work, Life Work as a Geneticist Award, Award of The University of Tartu. Professor Tiina Talvik was nominated an honorary citizen of Tartu and a cavalier of the Honorary Citizen of the City of Tartu and holder of the Grand Star of Tartu decoration.

Professor Talvik was also the Honorary President of the Estonian Society of Pediatric Neurology, being the teacher of all pediatric neurologists in Estonia. She was also an honorary member of The Estonian Pediatric Society and The Estonian Association of Neurologists and Neurosurgeons.

In addition to pediatric neurology and genetics, she was also highly passionate about the rights of patients and their loved ones. She stayed very active in the committee of Medical Ethics of Tartu University Hospital.

Professor Tiina Talvik was very strong-willed in standing for the rights of disabled people. She was the leading lecturer in the first teaching courses in rehabilitation and started science-based rehabilitation in Estonia.

During the past years she was actively involved in The Estonian Agrenska Foundation and was the head of the organisation since 2003 with the aim to improve the life of families with disabled children.

She was a remarkable doctor, a talented teacher, a loyal friend, a loving wife, mother and grandmother. Her infectious laughter will be missed.